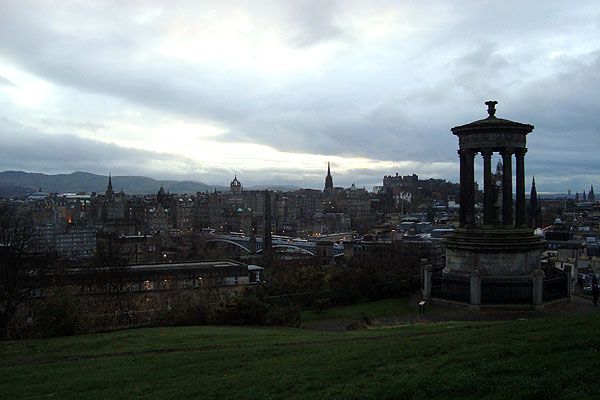 So, SCOTLAND. Seriously the sexiest and probably most confusing accents I have encountered so far on my journeys. Anyways, here’s a rundown of my fabulous trip to the far (but not far enough) north of the UK with Melissa and her awesome friend Alison.

On Friday, we took the 3pm train from King’s Cross to Edinburgh, which took a very long time considering the fact that my iPod froze mid-journey 😦 But we arrived, finally, in a little drizzle and quite lost. After finding our hostel, we set out for some food and stumbled upon this really cool-looking vintage pub called Dirty Dicks (right next to The Bad Ass), named for the little old man many years ago who used to clean up all the horse poop in the streets.

I ordered myself some steak&ale pie (which really tasted like ale) which was very good but very heavy.

Then us girls wandered down Rose Street (it has 37 pubs lined up = pub crawl of death?) to The Kenilworth to get a pint, and met a group of very rambunctious men who got too close to comfort. Not much more can be said here!

Anyways, we wanted to get an early start the next day so we called it an early night and returned to our beds of an “interesting consistency.”

We woke up on Saturday around 8:30 to make the free hostel breakfast at nine (toast, tea and coffee, and cereals! Who knew hostels could be so generous). Then we headed out down the road to visit Edinburgh Castle, which was gorgeous itself besides the wonderful views it gave us of the city. 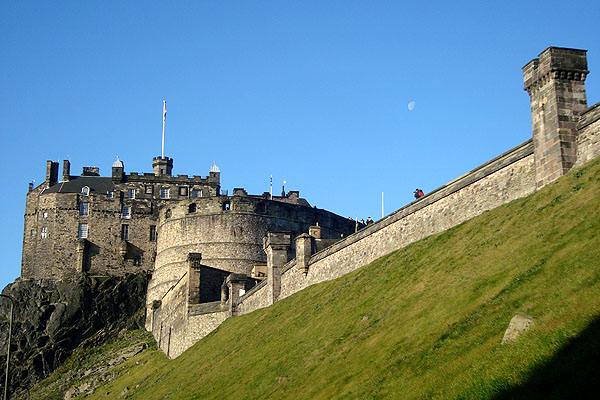 And on inside the fortress. 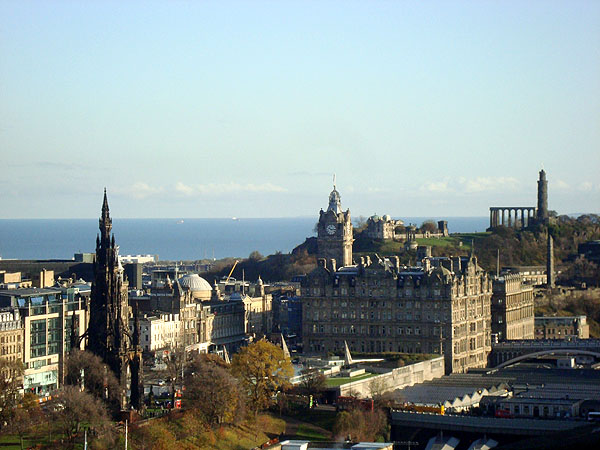 Plaid is the new black. 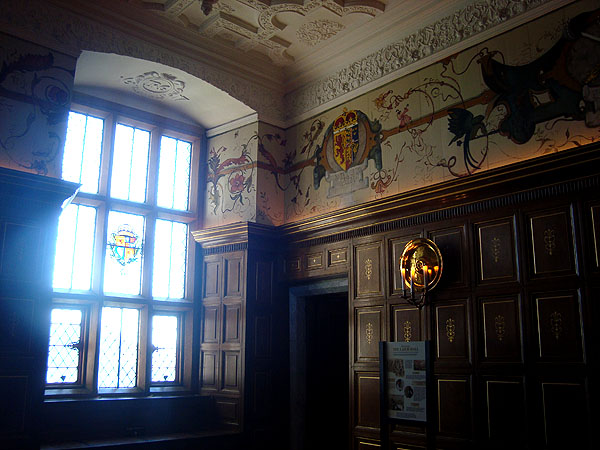 The Scottish War Memorial on the left (no pictures out of reverance). 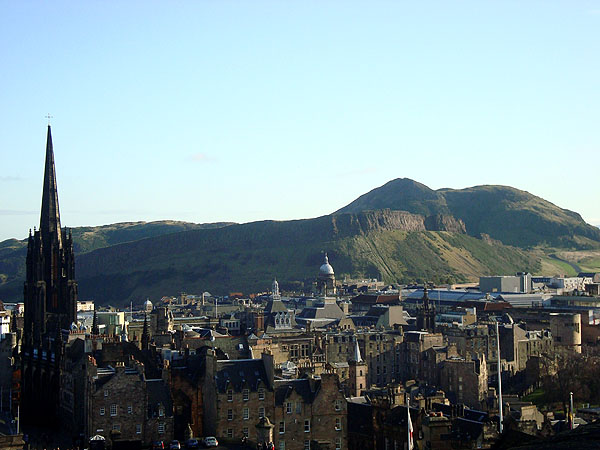 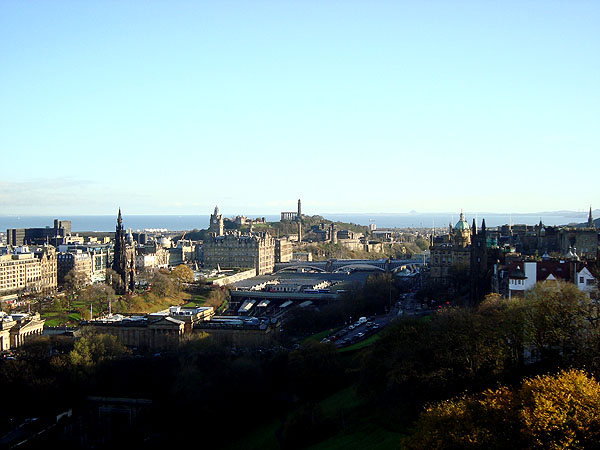 Among other sites were the Stone of Destiny, St Margaret’s Chapel, Honours of Scotland (the crown jewels), the Prison cells, and more gift shops than I could count. I took a lot of pictures BECAUSE I COULD.

Upon leaving the castle and after browsing some of the fabric shops, we ran into that famous William Wallace impersonator on the street, and proceeded to be flashed by that infamous tattoo on his butt (the locals would know). 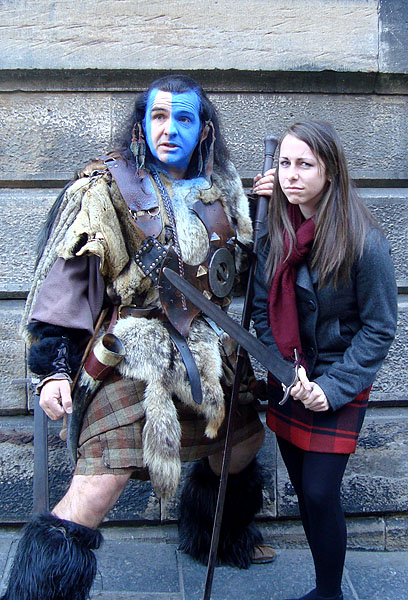 For lunch, we walked back around the castle to a farmer’s market, where I got a buffalo burger hot off the grill! Mmm mm.

After we had filled our stomaches, we walked down The Royal Mile, a great touristy street flooded with scarf&kilt shops and cashmere and bagpipes and clan souvenirs and pubs and great old buildings. We basically spent the rest of the early afternoon browsing and shopping and loving the atmosphere. For good or bad (I’m still deciding), I found the most gorgeous kilt I have ever laid eyes on and eventually bought for a price I don’t have the heart in me to name. Oh, christmas outfit, at least you are half done!

Then we walked over to Prince’s Street, another shopping strip, and discovered the great memorial dedicated to Sir Walter Scott (they really do love their writers)…

…before heading down the road to a great staircase that led up to Carlton Hill. There, many monuments and memorials and romanesque statues were arranged haphazardly together, and provided many more picture-taking opportunities as the day turned into dusk.

A view of the sea. 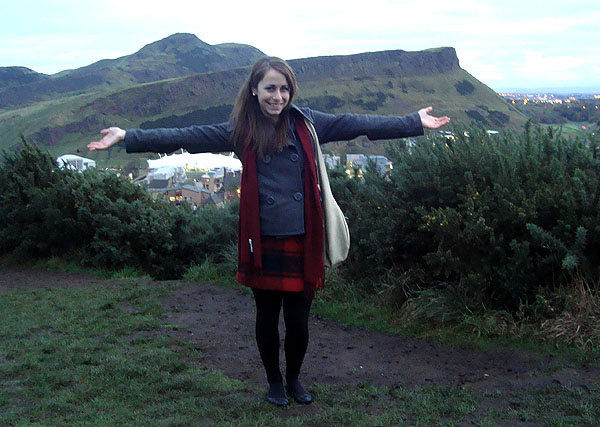 After stopping back at the hostel to drop things off and change into warmer clothing, the three of us headed over to Grassmarket to grab a bite to eat at The Last Drop. I got mince&tatties because I was still too afraid to try the haggis.

After dinner, we navigated the narrow streets to find The Elephant House, a café made famous by JK Rowling who often wrote there in a corner overlooking the castle. I was obviously beside myself.

The corner where she must have sat.

I got a chocolate fudge brownie with ice cream but did NOT get the t-shirt, as much as it broke my wee heart (although, pictures were indeed taken), because of the amount of money I had already spent on myself 😦 But the dessert made my tastebuds happy.

We visited another pub for a pint and great people-watching before calling it a good day.

Our last day in Edinburgh (sadly! I have found it to be so beautiful there) led us down Prince’s Street and the last legs of The Royal Mile towards The Palace of Holyroodhouse (HM the Queen’s official residence in Scotland) and the park.

And yes, epic accomplishment of the weekend: we scaled the hill and reached the peak of Edinburgh at Arthur’s Seat. Hundreds of pictures taken of beauty beyond measure. It was grueling, it was slippery, it was steep and exhausting and oh-so-green. 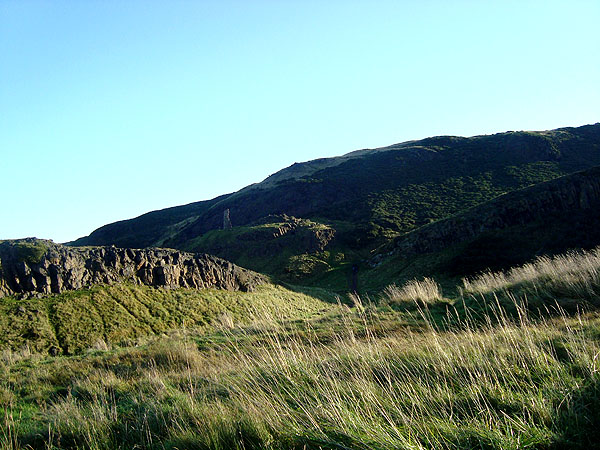 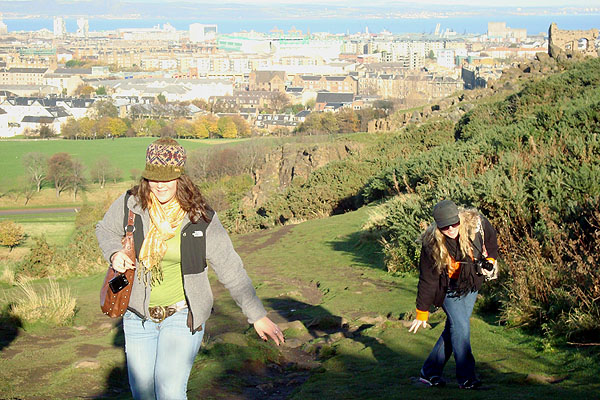 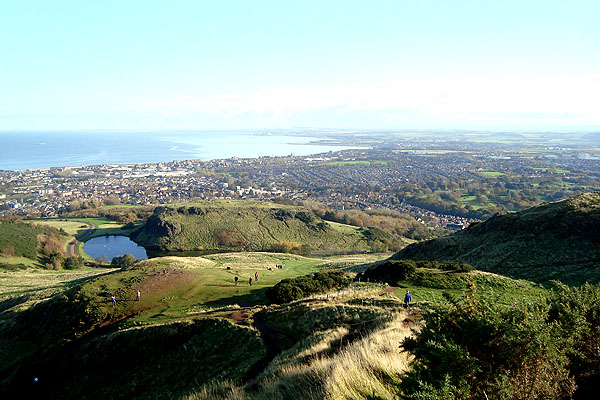 The view. You can make out the castle on the right. And you can’t really tell on the right as well, but where the rock ends is a sheer drop. Needless to say, much effort went into taking this photo! 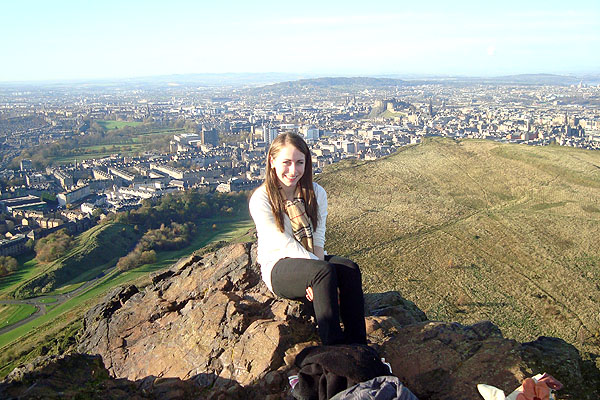 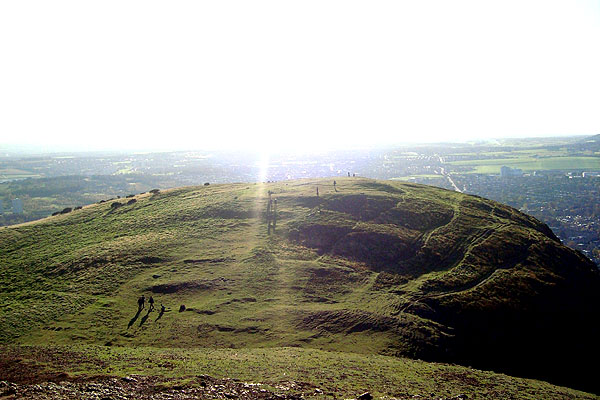 And we made it, taking a great many chances to conduct photo-ops of each other… 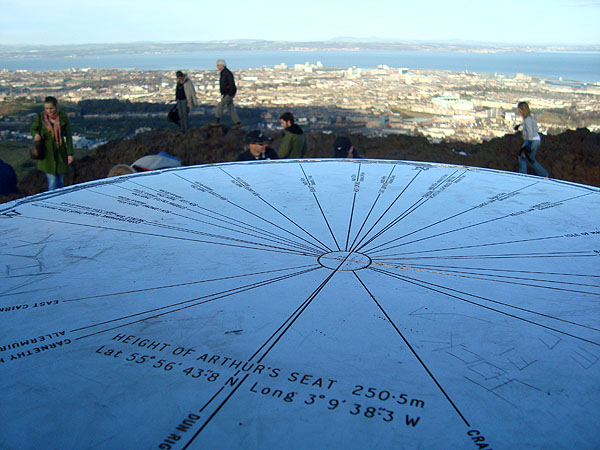 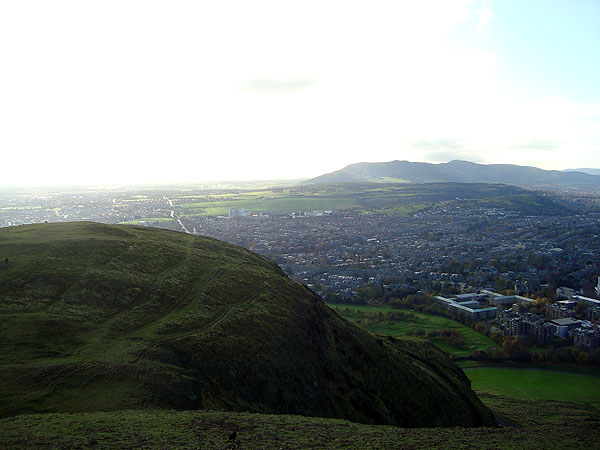 Eventually, we had to say goodbye to the greatest views of the city as we descended.

The peak where we stood. 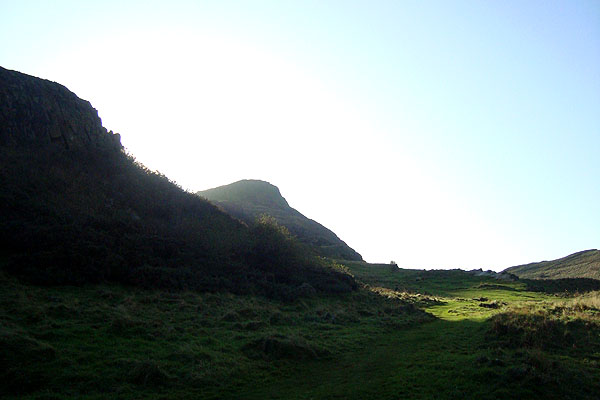 Back on ground level, we passed the palace again and walked back up The Royal Mile to get lunch at Tollbooth Tavern, where I ordered sausage&mash and manned up to order a side of haggis, nipps & tatties! It was surprisingly tasty, for pig’s intestines.

We did a little more shopping on our way back to the castle, so I could FINALLY decide on the make of the purchase I had been agonizing about the whole trip: 100% lambswool Lindsay scarf. Yes, you bet it’s personalized. 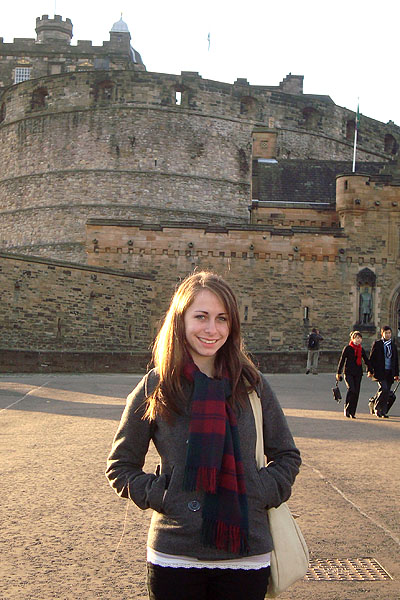 We then walked down the back way and through a garden that gave us one final breathtaking view of the city’s most iconic building before heading back to our hostel and to the train station and eventually London. 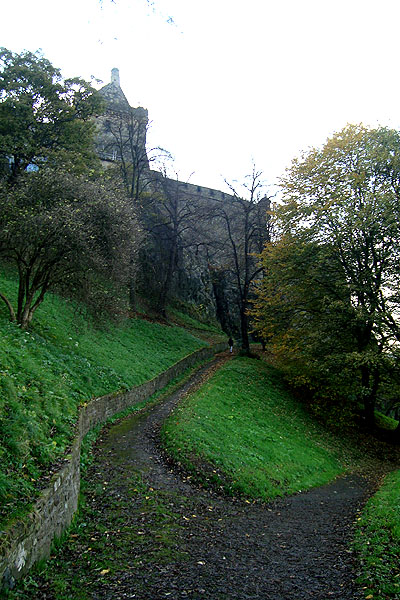 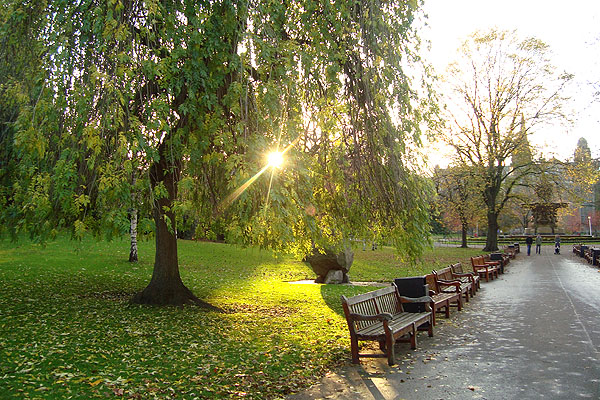 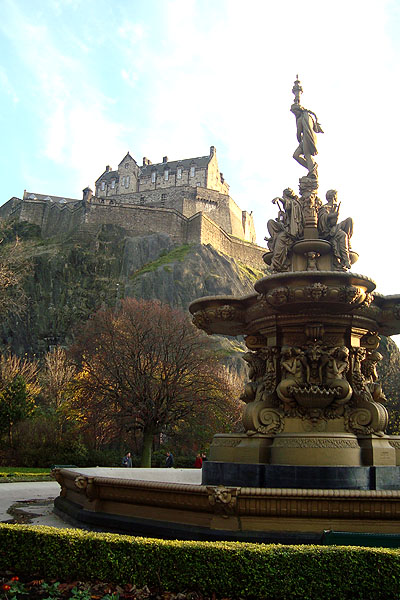 Goodbye Scotland, but not forever. I may visit your Highlands next week, if I can unearth the cash 🙂 A weekend taste was not enough for me of your great heritage.