Ha. And now, in quick succession, Sweden Sweden Sweden. Because, Yes. I am finally here. And even the unwavering fatigue could not dampen my first day in this glorious country of my ROOTS.

The trip to Copenhagen Central Station was…exerting , to say the least, having to tug the dead weight of my monstrosity of a bag over the bridge and through Copenhagen’s cobblestoned streets. But I made it to the station on time, with enough to spare to get rid of the last of my krona on yummy croissants and Cocio chocolate milk.

One last look in the train station… 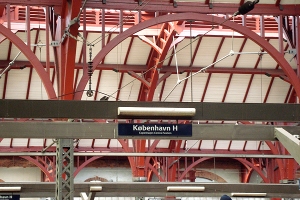 …and then, without much ado, I was off and heading over the bridge with Denmark receding in the distance. 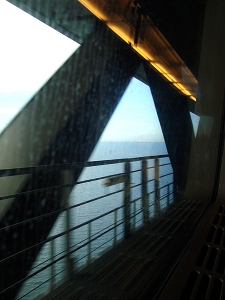 Of COURSE the day was sunny and gorgeous as I sat cooped up in a wintery-cold train, watching with wide eyes as quick flashes of Malmö rushed past my car window and Danish turned to Swedish over the intercom. But such is life. I spent most of the next three hours feigning sleep as I tried to picture Maria’s face.

I needn’t have worried, though, as I rolled into Gotëborg and found her waiting for me on the platform, squinting her eyes at me in hesitant recognition before opening her arms and inviting me for a bite to eat before a quick ride and tour through the city. 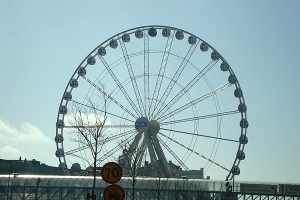 The harbor, with some fabulous sculpture. 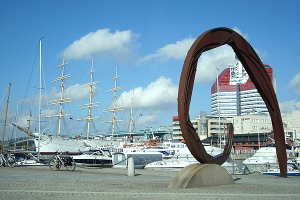 Ugh, the weather was beautiful.

And then, after a pleasant drive through Swedish back roads, bridges, and islands, we arrived in Uddevalla! 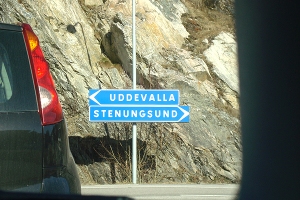 The weather was sunny and brisk – a rare thing in this part of the country – so Maria gave me a grand tour just in case the weather turned foul tomorrow. She showed me everything from where everyone in the family lived to the houses where she and Dad used to play as kids to the more iconic spots of the city.

Including the nice clock tower.

Dinner was had at Maria’s sister Karen’s, with their mother and Maria’s “man in her life” Anders. I’ll take this moment to relive the ridiculously delicious food (steak with this amazing sauce, breaded potatoes, blackcurrant jelly, and apple juice – I wanted to take a picture, but that probably would have been awkward, right?). So, so good.

After dinner, Maria drove me around again as the sun was setting. I saw the harbor, with a bunch of cranes that looked pretty neat.

And the bridge, from a distance.

Night was spent meeting Frida (a third cousin, or so they say) and we clicked instantly, laughing ’til we cried over our different pronunciations of wok (wook!) and kebab (KEH-bob), the ridiculousness of her friend on Sweden’s version of The Bachelorette, the fact that she’s never even heard of PacSun, and how I must, MUST, try Swedish chocolate tomorrow. I’m quite excited about that one.

Country life is different. Everyone, at least least everyone I’ve met, sticks together and rarely leaves the town in which they grew up. Since families have been here in Uddevalla for generations, everybody knows each other and there’s this comfortable, easy feeling that nothing is out of place. It is easy to admire from the outside, but I’m glad I grew up differently. I couldn’t imagine moving out of the house where I grew up only to live just down the street.

One thought on “SWEDEN”

Is this heaven? Or is it just a white woman's Instagram?
A bit of sunshine through the rain.
Mentally, I’m here.
“I get so lost in where I want to go I forget that the place I’m in is already quite magical.” Three months have disappeared since my last post, and suddenly, the weather has turned, pandemic restrictions have lifted, and life is looking different. Last weekend, my baby brother turned 30 and my first cousin got married. Time stops for no one. The ride has been rough, but here is proof that I’m enjoying it again...on a 12-meter racing yacht to boot.