Traveling without a camera is like swimming without limbs. My lovely pink camera finally kicked it today as I entered Gamla Stan and for the moments after (or at least for the next two hours), I was drowning in defeat. But a quick trip to the Sony Center and three Benjamins later, I am the slightly regretful but nonetheless relieved owner of a BETTER pink camera. Which, by the way, takes panoramas. How awesome.

So. Stockholm. I’m in STOCKHOLM. Not a Copenhagen fairytale, as I was warned, but gorgeous, gorgeous, gorgeous. I mean really, though, was anything less to be expected? More cobbled streets and rustic building façades but with much more leaning, much more sloping, and countless numbers of deserted alleyways that belong in those medieval tales of peasants who would become knights and princesses who run away for love. It’s much colder here, I’ve noticed, and much faster paced. The waters are glittery, with slabs of ice forever floating and crashing into the pillars of bridges, and the bridge views a dream. Did I mention it’s gorgeous?

I have a feeling I will only be taking panoramics from now on. That, and alleyways. Buildings are my travel chocolate. 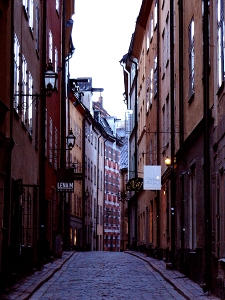 This kid I met from England at the hostel tonight told me this looks like “just your old generic European city.” I swear to you this will never get old for me.

Last picture from my old camera, and a goodie.

A quick itinerary for the next few days: